I have put together a preliminary timeline of the order of each recording, as accurately as possible. Please note that the dates of many of these recordings were not available to Concordia’s Archives, and so we had to do a bit of detective work to locate them temporally. The readings are separated into Fall & Winter/Spring semesters.

1969: Robin Blaser I086-11-005.1 & I086-11-005.2; Stanton Hoffman introduction, George Bowering in audience; Perhaps also in November, as Stan Persky reads in November also, most likely came from Vancouver together. He also references Gladys Hindmarch in a poem, who reads with Persky.

Jason was interested in the “detective work” that I did to find out the dates of each recording, and I think it’s important for other researchers to understand the process of uncovering an archive like this one.

When I started working on the project, the parameters of the archive itself were very vague. Jason had come across some of the recordings that were being held by other professors in the English department (past and present), and donated them to Concordia’s archives, which was holding several of the recordings also. (Perhaps a more clear description of this process could be provided by Jason if we do write a ‘history’ or introduction to the archives). Jason had found a type-written list written by Howard Fink of a list of the readers in the series, which we used as a starting place. Then, using the recordings that Concordia’s Archives had collected, we began the process of transcription and extracting more information about the recordings and the reading as a whole.

Some of the information about dates and order of the readings was readily available in the recordings themselves. Often there was a poet or professor who would introduce the reading, and they would often announce the date or the series’ number. Though in most instances this was either cut out or not recorded. At the end of the reading, the introducer sometimes would also announce the next reading.

Another way I found out an approximate year was by clues in what was said during the reading. For example, sometimes a poet’s book was being published that year, or they revealed that they were on a tour.

I also did quite a bit of research at the Archives searching The Georgian, The Concordian and other Concordia (Sir George Williams)-related newspapers for the names of the poets and any readings that were announced. Quite a bit of information was found because the English Department made announcements of future readings. An interesting find was a series of articles in The Georgian after Gary Snyder’s reading, titled “Get Your Shit Together…” written by Avi Boxer, Bryan McCarthy and Graham Seal, explaining their (strong) reaction to the Snyder reading.

Archives also had a series of typewritten papers (presumably also by Howard Fink) that listed the poems read during several of the readings–including dates. This was by far the most helpful source of information on dates and also helped the transcription process greatly as the titles of the poems were listed. (Though it was not always accurate, in some circumstances I am not sure if the date on the page is the date it was written, or the date the reading took place).

My search for bibliographical and biographical information also included google searches, which led me to places like Stephen Morrissey’s personal blog where he recounts a few memories of attending the readings–and to his own papers in the McGill archives. I found that he had collected two typed flyers from the readings (L.E. Sissman & Al Purdy). This was an important discovery because some of the recordings refer to flyers that were handed out during the reading that contained a short biography, date, time, location as well as information about upcoming readings.

Book searches also led me to details in poets’ biographies or histories of Canadian and American poetry about time poets spent in Montreal–which would often narrow down the reading to a certain year.

Unfortunately I have not discovered every reading’s date, and because I have discovered a few written references to recordings that Concordia’s Archives or the English Department don’t have access to, the order of the readings might be slightly off (especially when they are referred to as the third reading in the series, and we don’t know the total number of readings or recordings done).

There is also the issue that when Archives collected the recordings they too weren’t sure about dates, and in a few instances the recording was not in fact what they believed it was.

I had also tried to establish dates by looking at published version of poems that were read, but quickly realized that this method was highly unreliable as changes were often made before and after a poem is published.

I am absolutely sure that as this project evolves and we reach out to other researchers, professors and Montreal poets, new information will arise that will be valuable in shaping the series. 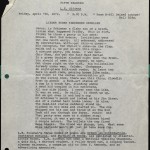 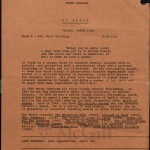